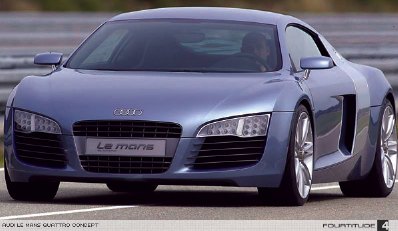 We’ve already heard about the Audi R8 supercar and I’m sure I’m not the only one who is drooling in anticipation of its release. A report has surfaced that makes this beauty even more intriguing. There is speculation that the R8 may be the first diesel supercar. Admittedly, the proof is far from absolute. In fact it is outright conjecture. It goes like this – a Gallardo was spotted in testing a few months ago that sounded more like a diesel than a typical Gallardo. That fact and speculation that the market conditions would be right for a diesel car have led some to conclude that a diesel R8 is imminent.

But what diesel engine? It could be the 4.2 V8 TDI from the A8, or the V10 that shows up in the Volkswagen Touareg. More interestingly, though, this could be where we first see a top-end V12 TDI that could later show up in the A8 and other production cars. No matter what, all the possibilities are another reason for us to eagerly await this car. Like we needed one.