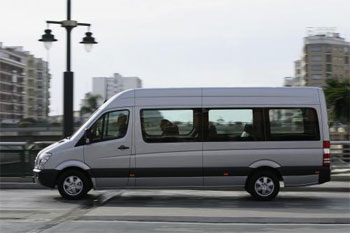 Two issues are pushing the development of cars that run on alternative sources of fuel: a deteriorating environment and quickly rising oil prices. Daimler Chrysler is the only company in the industry that is building Plug-in Hybrid Electric Vehicles, and they’ll be testing out Dodge Sprinters outfitted with the technology in a number of cities across the United States.

For short daily commutes, or for fleet vehicles that take short trips, the PHEV technology works great. However, it isn’t fully sustainable for long drives, because at present time, you can only travel 20 miles on a single charge (just plug it into the power grid). Of course, these are hybrid vehicles, so the engine can switch from full-electric mode to more traditional means of power. Two different engines have been mated to the electric motor: a five cylinder diesel and a V6 gasoline, the former of which provides the best fuel economy.

Daimler Chrysler plans on sending out up to 40 Dodge Sprinter PHEVs in California, Kansas City, and New York to see how they fare in the field. However, it seems to still be quite a ways off before you can walk into your local Chrysler dealership and drive off with one of these environmentally-friendly grocery getters.