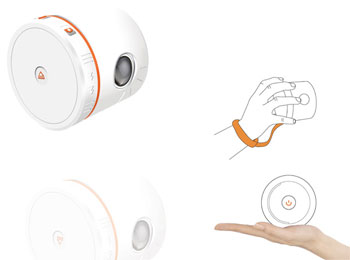 While the natural inclination these days is to immediately label anything coloured white (especially glossy white) as either Apple-created or Apple-inspired. That may be a half-truth, but I don’t think that Apple had anything to do with this strange concept for a future DVD camcorder.

Designed by Mandy Chang, its form factor is reminiscent of an oil filter and it clearly has a minimalist slant to it. You won’t find any extra buttons, switches, and doo-dahs on this. Instead, there is a simple slot-loading DVD drive, power/eject buttons, a slide out LCD display, and lens that can rotate the full 360 degrees around the device.

They say that this is “acting as a transition from a traditional button camcorder to an action driven interaction camcorder”, but I don’t see this being particularly comfortable to hold for long periods of time. Oh, and make sure you don’t drop it, because it’ll just keep rolling down that hill as you chase after it, screaming, “Ahh! That’s my camera!”