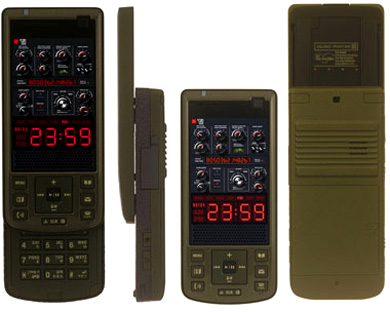 If you’re hunting for a music phone that looks a little more rugged, then you should take a second glance at the Music Porter X. The military themed handset comes in safari green, and makes use of an army-like user interface, complete with random-looking knobs, dials, and a “mock-up reel-to-reel screen.”

Unlike other music phones on the market that spend the vast majority of their time in your pocket or on your ear, the Music Porter X is meant to spend just as much time sitting in hi-fi stereo dock, pumping out the Village People’s “In the Navy.” Okay, how about “Ride of the Valkyries” from Apocalypse Now. Is that more your flavour?

One of the most unique features of this phone is that it runs on Macromedia Flash. You’ll also find a full gig of storage on-board and an FM tuner. They haven’t announced how much it will cost, the Music Porter X will be hitting the streets of Japan on April 8th.