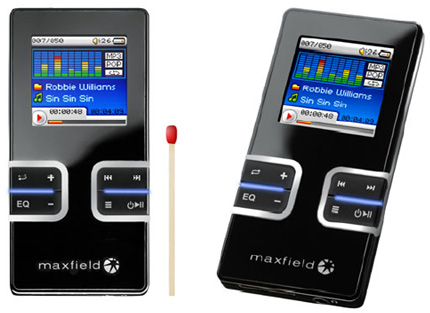 Maxfield doesn’t make very much of its own products — other than maybe the badging, I suppose — as they typically rebrand Korean-made gadgetry and sell it as their own. The German company, which was strangely absent from CeBIT (the show was in their own backyard) recently picked up a couple of new digital players that they’re proudly showing off now.

The P-X Photo is basically the existing P-X but with a 2-inch 65k color screen. It’ll play a whole slew of fun content, including MPEG4 video and DRM10, and you’ll be able to store a fairly substantial amount on its Hitachi-made 6GB micro-hard drive. No word on pricing or availability for this less-than-exciting announcement.

The Max-Sin is a pretty little number that resembles the iPod nano in many ways. There’s no click wheel here, but the dimensions are nearly identical. Unlike the nano, though, the Max-Sin will also do video and pictures in addition to its music playing ability. You’ll get about 15 hours of play, a graphical 10-band equalizer, and a 1.5-inch 128×128 OLED display. The 1GB Max-Sin is 139 Euros (just under the 159 Euro MSRP for the nano), so expect the 2 and 4GB versions to be priced accordingly.