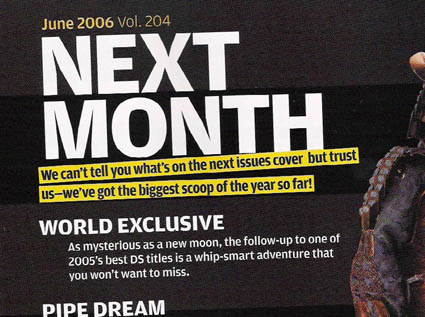 There are just certain titles that immediately evoke an intense emotional reaction in gamers. Names like Mario, Sonic, and Metal Gear are absolute classics, both in their old-school and newer renditions. Castlevania has been hugely popular even since its NES days, and now it seems that a sequel is heading for the Nintendo DS.

Nintendo Power is doing the teasing game. On the back of the current issue, the magazine says that in the next issue, they’ll provide a “world exclusive”.

As mysterious as a new moon, the follow-up to one of 2005’s best DS titles is a whip-smart adventure that you won’t want to miss.

Of course, this doesn’t necessarily mean that we’re getting treated to some more Castlevania DS goodness, but it sure does seem that way. If the planets are aligning just right, not only will we get our grubby little hands on a touchy-feely Castlevania, but a version that can make use of the growing-in-popular Nintendo Wi-Fi Connection service.