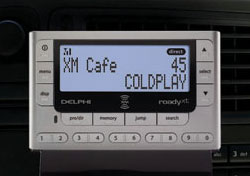 The battle between Sirius and XM doesn’t seem to be dying down anytime soon, with the nation’s leading satellite radio company opening ten new commercial-free music channels, seven regional news stations, and even a new talk channel featuring “Oprah & Friends.” XM Radio currently has more than six million subscribers nationwide, and they hope to capture an even bigger chunk of the pie with these new channels.

Variety and selection are key when it comes to marketing satellite radio and these new additions “demonstrate XM’s firm commitment to providing the most choice and the most channels in satellite radio,” said Eric Logan, XM’s executive VP of programming. The new music channels include those dedicated to latin pop (Viva, 91), heavy metal (Liquid Metal, 42), Southern gospel (enLighten, 34), and chill music (XM Chill, 84).

While Sirius may have Howard Stern, XM has captured the icon of homemakers everywhere by getting Oprah Winfrey on board for “Oprah & Friends,” debuting this September on channel 156. Many of the experts that get interviewed on the popular daytime talk show will also “appear” on the radio show.