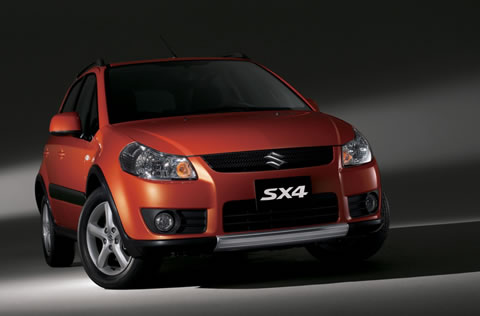 Suzuki might not get the same kind of media attention that say Toyota or Ford gets, but the automaker isn’t exactly cowering in the corner either. In fact, they sold more vehicles in 2005 than any other year in the company’s history, and they hope to continue the trend in 2006 with a couple of new additions. The New York International Auto Show sets the stage for where American Suzuki plans on showcasing two of its premiere vehicles.

Officially a crossover vehicle, the XL7 is designed to “redefine the midsize SUV.” Power is more than adequate from the 3.6-liter V6 DOHC engine. There’s plenty of space inside for cargo and people, and you’ll also find a whole lot of flexibility “for all aspects of active lifestyles.” Look for the new XL7 to hit showrooms in the fourth quarter of this year.

The SX4 is the “compact sport X-over with all-wheel drive” that was first introduced in March at the Geneva Motor Show. Making its North American debut in New York, this vehicle sports a five-door design, an economical 2.0-liter DOHC engine, and the “Three-Mode Switchable AWD system.” Transmission options come in the way of a five-speed manual or four-speed auto. The SX4 will be available in the US come the Q3 2006.