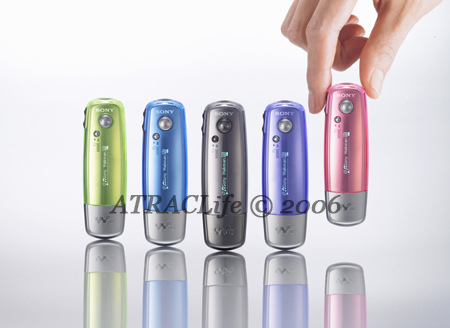 Some time back Sony killed off the Bean, but that doesn’t mean the electronics giant is pulling out of the small form factor MP3 market altogether. Here is a set of new flash-based players that sport the same OLED technology that we’ve come to love (and forget).

The NWA-002, 003, and 005 all look pretty much the same with the thumb drive design and built-in USB plugs (don’t lose the cap), except they come in different capacities: 512MB, 1GB and 2GB, respectively. There are five colors to choose from for these E100/E300 series replacements. Mini-Beans, if you were.

In keeping with simplicity, they’ve kept the features rather limited as well. For one thing, there is no FM tuner nor do these players come with Sony’s Connect Player software. Instead they will ship with Sonicstage 3.4 software when they hit shelves in May. Expect pricing on the NWA-00x series to be somewhere between the shuffle and nano.