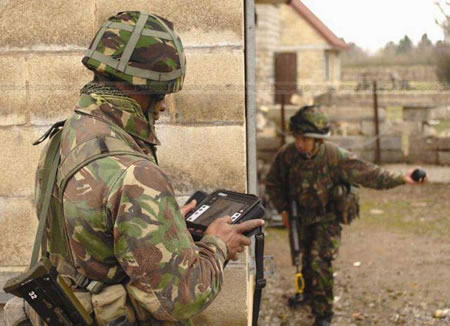 At first glance, you won’t notice that the Eye Ball R1 is a camera built for combat purposes. It is as handy as your typical baseball, roughly measuring 3.5 inches and weighing in at less than a pound.

The one thing that sets it apart from the other surveillance cameras is that it can be thrown around like a ball, literally. You might even mistake this feature as an NBA innovation. Its rubber and polyutherane casing allows you to throw it anywhere. The camera won’t break even when you chuck it against a brick wall as the materials that comprise the housing allow it to absorb the shock and bounce off surfaces.

But the real action begins after the Eye Ball has been thrown. Its camera function activates after it settles from a bounce. It can capture video images from up to 25 meters. It also records audio being emitted from a distance of up to 5 meters.

You would be thankful if you’re the soldier who is tasked to retrieve information from the device as it broadcasts data in real time to a handheld unit at a comfortable distance of 200 meters. Its omnidirectional lens can rotate at 4rpm and gives a 41-degree horizontal and 54-degree vertical view of the terrain. It is also equipped with night vision function. Cool indeed.