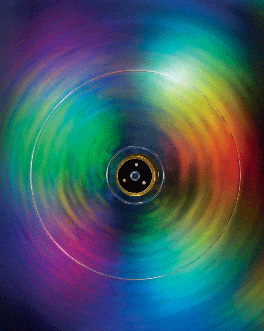 InPhase has done it again. The digital storage company has announced a storage density on its holographic disks to 515 Gbit/in(squared).

Just a year ago, the company achieved density of 200 Gbit/in(squared). The more than doubling of density within 12 months is a significant advance in the drive toward huge-capacity DVD drives. Yes, such drives are the eventual target of such storage density enterprises.

The most recent disk, according to InPhase, can hold 106 DVD movies. (Blu-ray and HD DVD disks can’t hope to compare to that kind of storage, by the way.) Based on current memory size, that means a disk that can hold up to 500GB. In highly technical terms, the demonstration recorded 1.3 million bits per data page and 320 data pages per book.

The announcement comes on the heels of another company pronouncement regarding a 300GB holographic disc later this year.