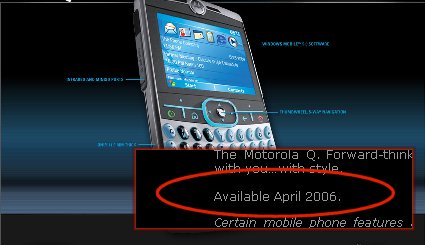 What do you get when you have the optimum functionality from a smartphone with the ultra slim and sleek profile of the RAZR? Of course, the A to that Q is the Q. The Motorola Q has been drooled over ever since its 0.45-inch thin visage graced the multitude of tech fanboy pages on the web, and now it seems the big M has unveiled a launch date, and it’s sooner than you may think.

According to a promo page on Motorola’s website, the Q is set to be “Available April 2006.” Of course, they don’t say when exactly in April, but it could mean that by as early as next week, Verizon customers will be rocking the “world’s thinnest full-function smartphone.” They briefly changed the page to “Coming Soon”, but it seems to be showing “April 2006” again.

Most of you already know the key specs on this slim behemoth, so I’m not going to go into detail about that. Keep your ears peeled to the airwaves (or rather, Mobile Magazine) for an announcement from Verizon (who seems to be the only American provider that will carry the Q) in the coming days and weeks.