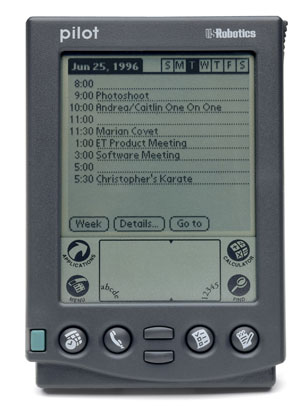 Palm turns 10. This year marks the 10th anniversary of the appearance of the Palm Pilot and the beginning of the transformation of the information industry.

In the mid-1990s, you could get a Pilot for US$299. If you were on the go and wanted to take your calendar, contacts, and to-do lists with you, you willingly paid that price. You couldn’t get your email on that Pilot, but no other device offered you that option, either.

The sync function was the Pilot’s most popular feature, and it drove sales up to 1 million in the first 18th months.

“The first Pilot organizer was such a runaway success, even we were a bit surprised,” said Ed Colligan, Palm president and chief executive officer (and in picture above, right).

Now, of course, we have the Treo smartphone, with Palm again leading the way in organizing and sharing information in exciting new ways. In the 10 years in between, the company has sold more than 34 million devices. Also, more than 29,000 software applications have been written for the Palm OS platform.

The company has big plans to celebrate its anniversary. Said Colligan: “I’m enormously proud of what we’ve accomplished, and I’m even more excited about what’s yet to come.”