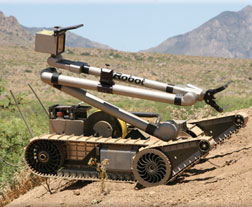 More robots are on the way, and the Navy couldn’t be happier.

The U.S. Navy has placed an order for 213 more iRobot bomb disposal robot systems, for a cost of US$26 million. The bots are PackBOT MTRS (Man Transportable Robotic System) and sport advanced tools and sensors that keep the humans at a safe distance. The first such order was placed in September 2005 for 103 of the robots.

The new MTRS systems will see action in Iraq and in other hotspots. More than 300 are currently deployed around the world. The number of successful disarmings in the past several years is in the tens of thousands.