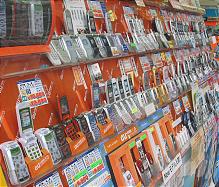 Some time back we heard about a proposed ban in Japan that who effectively prohibit the sale of used appliances (including our favourite little electronic gadgets and doo-hickeys). You couldn’t pick up an old Famicom to fiddle with or an archaic Nokia phone under this law that goes into effect on April 1st.

Second-hand dealers and a number of musicians flooded the Japanese government with cries of anguish and discontent, and it seems the Trade Ministry has heard the call of the people, because selling used stuff in Japan is a-okay once again. Well, not exactly.

They’ve reworded the law so that the dealers are “selling” you anything, but are rather “renting” them to you on a long term basis. If you happen to find yourself in a pawn shop in Tokyo, checking out a wicked turntable, don’t be surprised if there’s a “rental agreement” to go with it. And like a certain video store, there are no more late fees!