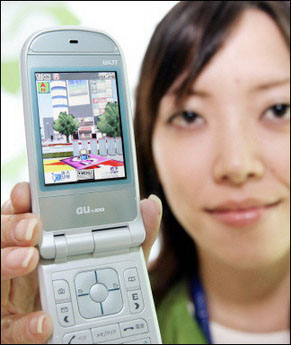 If you get the urge to buy something or are feeling hungry, tell it to your mobile phone.

KDDI has just revealed plans to launch a navigational service through its cellular phones. To locate a particular place or establishment, all you have to do is key in its telephone number or postal address. For public buildings, you just have to provide its name. Public transport schedules are also available.

The service, to be launched in April, is actually an improved version of its EZ Navi-Walk program. The previous edition, which utilizes Global Positioning System (GPS) technology, is already a hit in Japan. For those who are graphically-challenged, EZ Navi-Walk also has a voice feature which provides directions in audio.

The noticeable difference between the previous edition and the present service is the kind and quality of the images that are shown on the mobile phone’s screen. The new system let’s you see three-dimensional depictions of the roads and structures that are around you.

So what’s the big deal with the 3D enhancement, other than the graphical treat that you’ll be having every time you check for directions? Well, you’ll know when you come across an intersection. Two-dimensional illustrations of crossroads can be very confusing sometimes you know…

This new KDDI navigation service will be available by the end of next month.