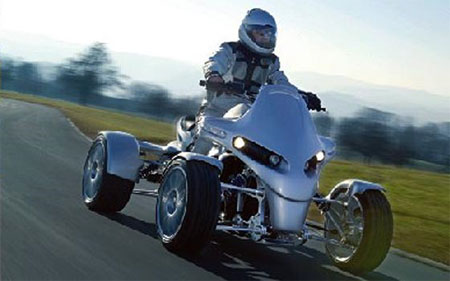 Sure, you can buy a ready-made quad-bike from some other manufacturer, but wouldn’t you much rather say that you’re riding around on a Gruter and Gut? The company better known as GG has taken a BMW motorcycle and thrown four wheels onto the thing, reaching top speeds of up to 106mph.

The Swiss retailer already sells plain Jane BMW bikes, but they thought it would be much more fun to go four-wheeling through some open terrain. The GG Quad was born, sporting an 1100cc flat-twin engine, putting out a decent 90 horsepower. It’s quite a bit heavier than its two wheel brethren, weighing in at a hefty 375kg, but that extra weight should make it quite stable, and you’ll probably never need to actually pick it up.

The custom-made quad-bike can be purchased from Gruter and Gut for an asking price in the neighbourhood of £25,000 ($43,560). So, GG/BMW four-wheeling, in this instance at least, certainly won’t be for those with a skinny wallet.