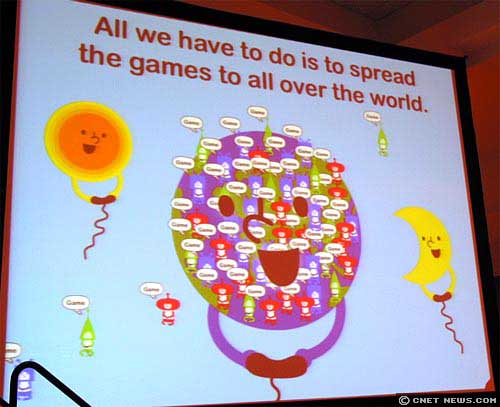 Design a video game, win the Nobel Peace Prize. That was the focus this year in the third annual Game Design Challenge.

One thing for sure was that the contest would have a new winner. Will Wright, who created The Sims, won the first two challenges, didn’t return as a contestant, although he was a judge, along with Zimmerman. Wright won in 2004 for creating a game about love and in 2005 for a game built on the words and images of American poet Emily Dickinson.

Bleszinki’s entry was titled Empathy, in which players become a father of a family of five who must keep his family alive until a devastating war ends.

Takahashi didn’t have a game so much as he had an idea: that people should play more video games because they aren’t violent when they do. It was called We are Videogame Romantics.

The true hit, though, was Smith, who presented a multiplayer game titled Peace Bomb. The game creates flash mob, crowds of people who come together suddenly in a place of note to do something important, and then disappear. Players have to cooperate with one another to further their goals, and Smith’s idea is that this encouraged players to form social networks, which could spill over into the real world as players get together in real life to do peacefull things like clean up public messes, speak out injustices, donate money, plant trees, etc.

Zimmerman and Wright, along with the audience’s applause, declared Smith the winner. Whether he wins the Peace Prize remains to be seen.