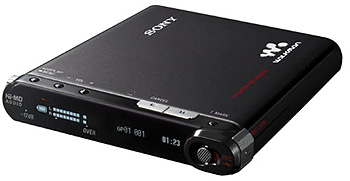 The Minidisc (MD) isn’t particularly popular here in North America, but Sony’s propriety format is huge in Asia and has a strong following in Europe. It’s hard to say goodbye, especially when the devices’ voice recording capabilities are so well-liked. Well, there is a new addition to the family, so to speak, because Sony is releasing the MZ-RH1 Hi-MD Recorder.

Whereas regular MDs held about 300MB of storage, Hi-MDs are capable of about 1GB. That’s enough for over seven hours of very high quality compressed audio, or reportedly up to 45 hours of music.

The MZ-RH1 is compatible with both Macs and PCs, and it makes use of a high definition digital amp. The aluminium body houses a line-in, mic-in, 5mW output and a 6-band equalizer. This will likely be the only Hi-MD recording device to be released by Sony this year, and industry pundits are saying that the MZ-RH1 is the format’s swan song.

It seems that the Sony MZ-RH1 Hi-MD Recorder is will be available soon, with a not-so-cheap asking price of around $275-325 USD.