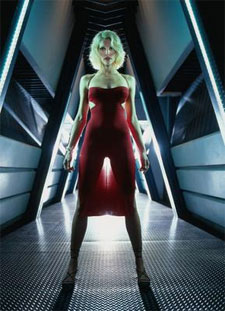 Geeks of the world unite, because Battlestar Galactica is heading straight to your cell phone as a mobile game. The SCIFI Channel has joined forces with IN-FUSIO, an international mobile games publisher, to bring the cult classic to the small screens of our handsets.

Based on the popular television show, the game was originally launched way back in 1970. The game lets you get behind the controls of the Colonial Viper Mark VII high performance fighter, flying through 11 levels of “interstellar war.” Nerds will be happy to hear that you’ll have a front row seat as you head into a head-to-head battle against the “deadly Cylons.”

The Battlestar Galactica Mobile Game is now available via download through a number of major North American wireless service providers. More “mobile game entertainment applications” featuring our Galactica heroes are destined to hit handsets throughout the rest of this year, ramping up to the third season of the TV series this fall.