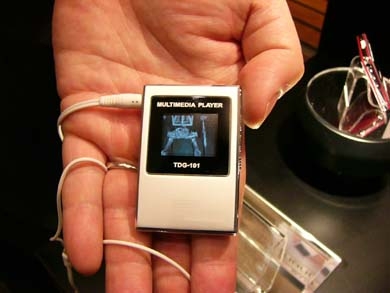 Some time back, we heard about TakaraTomy (better known as simply Tomy here in North America) jumping into the MP3 player with a DAP that took on a mini teddy-bear form factor. Sure, that may have been cute and all, but it wasn’t exactly top of the line, and realistically, it probably wasn’t something you would consider buying for yourself.

Seems like the toymaker is taking the portable media market a little more seriously now, because TakaraTomy is releasing “the nano channel”, a tiny DAP/PMP that comes packed with features. Weighing in at a mere 28 grams, and measuring just 8 millimetres thick, this thing is incredibly small.

Playing music on it isn’t a problem (MP3 and WMA support), but if you plan on watching the latest from Peter Jackson, you’ll be doing a whole lot of squinting because the TFT screen is a miniscule 1.2-inches. But i’m sure you’re used to that by now considering the size of that cell phone display. Video support includes MPEG1/2, Quicktime, ASF, and WMV. Battery life for audio is a measly six hours, so don’t expect a lot in the video department there either.

The TakaraTomy nano channel will start shipping this summer, with the 1GB version selling for around ¥17,000 (~$145).