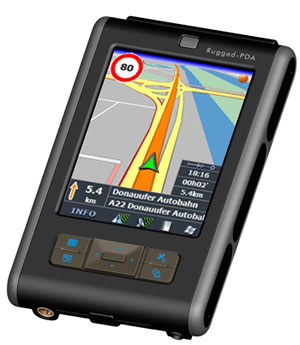 It’s small, it’s cheap, it’s water-proof… and perfect for those who love the great outdoors.

Andres-Industries has just released the “world’s smallest and most inexpensive rugged PDA”. This rugged version of the Pocket LOOX N520 is designed to withstand the elements. It is also labeled as the “world’s first water resistant PDA that has a GPS receiver”.

The unit’s tough shell does not compromise portability though. At 121x76x17.5mm and 200g, you could still easily carry it around. Whether you’re traveling on two or four wheels, this unit could fit or be mounted on your vehicle easily as it comes with a car kit and a motorcycle mounting pack.

Processing power is provided by Intel’s 312MHz XScale PXA270 chip. Supporting the CPU is 64MB of RAM and 128MB of flash memory. You could further expand this through the SD/MMC slot which also supports SDIO.

Getting online is easy and convenient as connectivity is via industry standard wireless LAN 802.11g Wi-Fi.

This rugged PDA from Andres-Industries will be released in Europe before this month ends. The basic set is priced at €550 (US $670), while the GPS bundle which includes a map, motorcycle mount, and the Navigon mobile navigator MN5 retails at €699 (US $850).