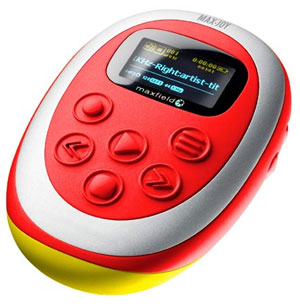 Is your child nagging you for an MP3 player? You might consider giving in with the new MAX-JOY MP3 player from Maxfield, which is especially designed for kids aged 6 to 12.

MAX-JOY addresses almost all the worries that you may have in allowing your child to use an MP3 player, foremost of which is durability. The unit’s robust shell is specifically built to withstand shocks and impacts that are usually associated from throws or drops. It is also dirt and water resistant. The case is also securely held by safety screws which would prevent your child from making a Lego construction out of the unit.

Large keys adorn the tough casing, which make it easy for children to press the buttons. The OLED, which displays two colors, is also brighter than usual.

Sound output is limited to just 60db to protect those developing eardrums. The Koss headphones are also built tough and contoured in a way that will not interfere with the development of your child’s ears. Still worried? Don’t be. It comes with a 15 year guarantee.

The 80x56x26mm, 50g MP3 player has a 256MB memory capacity, expandable to 2GB through an MMC card. The expansion card could be pre-loaded with audio stories and fairy tales (well, they ARE for kids).

Songs could be arranged according to artist and title. It supports Windows DRM, and can entertain your child for up to 19 hours on a single AAA battery.

The MAX-JOY can be bought for around £48 at Amazon.com.uk. The bundled version where a 128MB MMC card is included will be available later this year for £61.