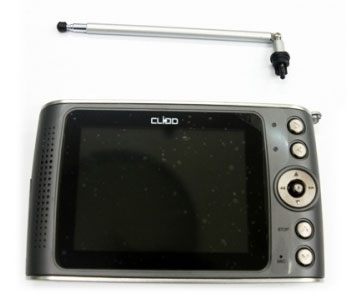 There are literally giants in the market that are easily household names — Samsung and Cowon immediately come to mind — but that doesn’t mean you should dismiss lesser known names without giving them a chance. I have personally never heard of Cliod, an electronics maker based out of Korea, but the company’s new PMP might be worth looking into.

It’s hard to set yourself apart in the world of PMPs based on look alone, and the Cliod unit is no different. It’s your standard flat rectangle, but it’s nice to see the rounded edges. Video support is excellent, taking in everything from Mpeg1/2/4, XviD, and DivX to ASF and WMV9. As its antenna indicates, Cliod’s portable multimedia player comes with a built-in TV tuner, allowing you to catch DMB signals to watch your favourite dramas and whatnot… if you’re in Korea.