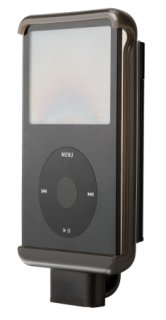 I wrote yesterday about a product from iLuv that can boost the battery life of your iPod Video, but if you’re hesitant to buy a product from a company you’ve never heard of, you’ll be pleased to hear that you can get a similar power-adding gadget from a bigger name in portable peripherals – Belkin – in the TunePower for iPod Video.

Unfortunately, you won’t get the extra 55 hours the iLuv i604 is said to provide with the TunePower, because Belkin’s device can only do six hours more than what your iPod Video can do on its own. Realistically, you probably don’t need over two days of extra battery life, so the Belkin TunePower may be a good option if you’re worried about running out of juice during a flick.

Packaged in with the battery booster is an AC adapter (for simultaneous charging and playback), as well as a pair of dust- and damage-protecting sleeves. Available a little later this month, the Belkin TunePower will go for $79.99.