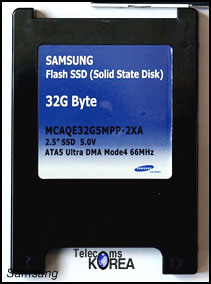 I know what you’re thinking. Samsung makes the news pretty well every day, and it usually has something to do with a multi-megapixel camera, a huge amount of storage, or mobile TV on a cell phone. Today is a little different, Samsung has announced that it will be ushering in the “New Mobile Wave” at the third annual Samsung Mobile Solution Forum.

Among the innovations the electronics giant is showcasing is the world’s first 32 gigabyte flash-based solid state drive. They plan on implementing this NAND memory into a variety of devices, including cell phones, PDAs, and even laptops.

Having all this extra functionality doesn’t mean much when the device can keep running for more than a couple hours at a time, so Samsung SDI – “a sister company” – is working on new lithium ion batteries, including the world’s highest capacity (2600mAh) for notebook computers. Similar technology is being worked on for DMB phones, digital cameras, and the like.

Samsung wants to make sure it covers all the bases because “multiple IT functions [are] converging more rapidly into a single mobile device,” according to Dr. Chang-Gyu Hwang, president and CEO of Samsung’s Semiconductor Business. “Samsung’s cutting-edge semiconductor technology is playing a major role in driving this accelerated ‘New Mobile Wave’.”