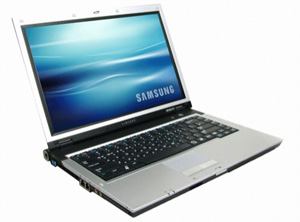 Following Apple’s lead, Samsung has unveiled a Flash disk drive that might some day soon replace traditional hard drives in desktop and notebook computers. (The Apple nano iPod is powered by a Flash drive.)

Some numbers: 32GB, 1.8″, and 95 percent. That’s the storage capacity, the form factor, and amount of power less than a traditional hard drive that the Flash drive uses.

We know that the largest desktop hard drives can exceed 80GB of space. But notebook computers, Ultra Mobile PCs, and other portable devices are another matter. (Indeed, Samsung demonstrated a notebook powered by one of the new Flash drive at CeBIT.)

Two more numbers: 57 and 32. Those are the read speed and write speed at MB/s, according to Samsung. Current read speeds are 24MB/s.

Altogether, these numbers promise a brave new world in storage space. Samsung has no delivery date yet for these Flash drives, but they are certain to change the interior face of notebooks and handhelds when they arrive; and, desktop innovation can’t be far behind.