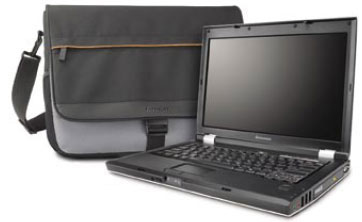 Lenovo has just launched a new laptop that is heavy on the specs… and also on the arm.

The N100 is Lenovo’s second release that does not bear the IBM mark. The removal of the TrackPoint or UltraNav may also turn off IBM fans as the pointing devices have already become a distinct feature of the brand.

IBM sentimentality aside, the N100 packs great features. Computing power is provided by Intel’s new Core Duo processor, which has a clock speed of up to 2.0 GHz. You could also choose a Core Solo-ran version that has speeds of up to 1.67 GHz.

The N100 is big on memory, capable of having up to 2GB using DDR2 667MHz modules. Kiss those storage worries goodbye as hard drive (serial) capacity could reach up to 100GB at 5400rpm. The unit also has a 4-in-1 memory card reader.

For optical drive needs, users could choose between a CD-RW/DVD-ROM or DVD-RW. Power could be provided by
6- or 9-cell batteries. Connectivity is via four USB 2.0 ports and one 4-pin FireWire port. A fingerprint reader and a consolidated camera could also be included at the buyer’s option.