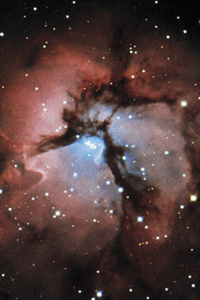 Color pictures from space in real time? It could happen, thanks to research announced at MIT this week.

The first step is what has actually been achieved, which is the development of a light detector with 57-percent efficiency at 1,550 nanometers. That 1,550 nanometer accuracy is significant because that is the wavelength at which broadband signals travel over optical fibers. The 57-precent figure is a huge jump, the current standard detector efficiency is just 20 percent.

What does this all mean? Well, the higher the efficiency, the more data that can be transferred in real time. Color images contain much more data than black-and-white images, so they take much longer to transmit, for now.

What the MIT researchers have done is to augment current optical systems with some novel technology. As it stands now, you need a big laser and an even bigger generator to send data at high rates of speed. Doing that in space is a questionable proposition because of the costs involved. So the MIT folks added a device they called a “photon trap,” which can absorb photons and use them to power the detector. The more photos you have, the more energy you can produce, the higher your efficiency is on a light detector, and the less space you need to take up to do it.

Right now, the number is 57. They hope to boost that considerably in the near future.