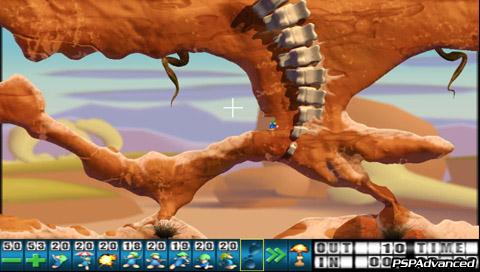 Nearly every major video game system ever made, from the Nintendo Game Boy to the Commodore 64, has had a Lemmings title grace its library. And now, the classic is finally making an appearance on Sony’s pocket player, the PlayStation Portable (PSP). In fact, Lemmings is probably the most ported game of all time, and it is just as fun to play today as it was when it first hit the market way back in 1991.

The puzzle game forces gamers to guide the mindless furry green animals through a maze with an entrance and exit point. Sony has maintained this timeless formula — getting the Lemmings to avoid steep cliffs, raging rivers, and flame-throwing turrets — but has updated the graphics just a touch, and thrown in 20 all-new puzzles, exclusive to the PSP. There are more than 150 levels in all.

Got a couple minutes (or hours) to kill? Why not improve your problem solving skills with a Lemming or two on the PSP?