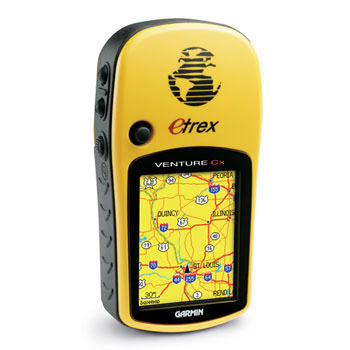 Garmin has just added a low-priced model to its GPS line. The eTrex Venture Cx is the right GPS device for you if you’re into outdoor adventures. Even though it is the cheapest GPS device that Garmin has, you’ll get more than your money’s worth as it is also loaded with advanced features.

The unit’s display is a TFT color screen that has a 176×220-pixel resolution. A basemap of America is already loaded in the handheld device, while a European map will soon be available.

You’re not restricted to the unit’s built-in maps though, as microSD cards are available for a broader mapping detail. These cards contain inland lake guides, BlueChart marine cartography, and MapSource topo. You could also load or copy paths and waypoints via USB.

Planning on a water adventure? Don’t leave your eTrex Venture Cx. This unit is waterproof, submersible for up to 30 minutes in 1 meter of water. It could also run for up to 32 hours in just two AA alkaline batteries.

The device has 500 user waypoints with text and graphic labels. Twenty of these paths are reversible, with 50 points per route. It also features a 10000 point track log that is automatic, as well as 20 that are saved (500 points each), which enables you to retrace your path in either directions.

The eTrex Venture Cx will be released later this month and is expected to be priced at $249.