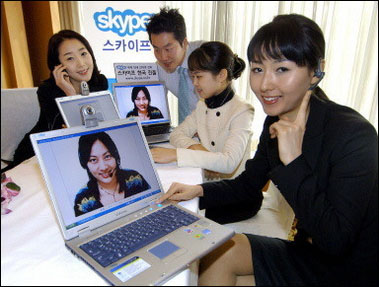 If you are all for Internet telephony, you wouldn’t want to be in China right now.

China has just suspended the issuance of Voice over Internet Protocol (VoIP) permits until 2008.

The news of the restriction came from Tom Online’s chief executive, Wang Leilei, whose company has been collaborating with Skype for a VoIP venture.

The move is widely seen as the Chinese government’s response and remedy to the growing threat that landline operators are facing from VoIP.

Skype is the leading VoIP company in the world. It offers very cheap or even free calls to consumers who have a Internet access. Skype does not charge customers on computer-to-computer calls. Computer-to-telephone calls are charged, but the rates are considerably lower than that imposed by fixed-line operators.

The two-year ban on VoIP businesses is seen as a big setback for Skype’s plan to tap the biggest market in Asia. The company has been conducting negotiations with various telecom providers since last year in order to set up its VoIP service in the mainland.

Li Ka-shing has downplayed the effect that the suspension would have on Tom Online. The Hong Kong tycoon, which controls the local Internet portal group, said that their main concern is to broaden their user base. He also added that they have not yet invested much on VoIP.

The Chinese government has been aggressive in its campaign against VoIP. Last September, an unnamed Chinese telecom firm has acquired a VoIP-blocking software from Verso Technologies.