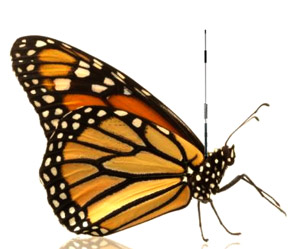 A team of scientists at the Pentagon want to create an army of cyber-insects, but some entomologists don’t like their chances. The idea is that if a micro-system was inserted into an insect in the pupa stage, the step between caterpillar and butterfly, the bug’s internal organs would grow around it and integrate it into the internal organs. When the insect is fully grown, it is believed that that micro-system would allow the bug to be remote controlled, so that the bugs could be sent to check out explosions or other dangerous areas. The micro-system would transmit data from the area back to the scientists. The Pentagon is looking for bidders to come up with proposals for realizing this idea. The winning bidder will have to be able to deliver an insect within 5 meters of a target 100 meters away and transmit data back via chemical sensors, microphones or cameras.

Scientists outside the Pentagon seem unconvinced. Some call the idea ludicrous and unworkable, while others suggest that it would be possible to make an insect feel attracted to certain chemicals, but that full flight control is unrealistic. The Pentagon tried a similar experiment with wasps, but the urge to feed and mate was stronger than any control.

In the movie The Fifth Element, a remote controlled cockroach is sent out by spies to monitor the communications of the president. Similar activities would no doubt be within reach if something of this nature were ever to be created.