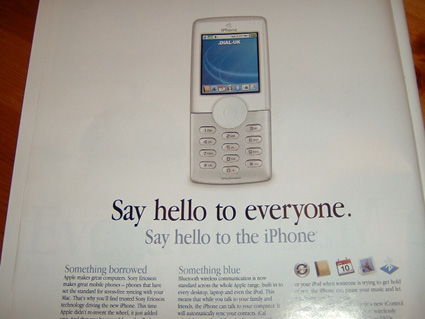 Rumors about a cellular phone from Apple have been running rampant on the internet for ages now, with pretty much every technology news blog having at least a half dozen articles on the subject, because, well, everyone wants to know. Up until this point, it has been mostly conjecture, but you throw in a name like Morgan Stanley – in fact, two analysts from the firm – that bumps the rumor into a status of being that much more “real.”

The picture provided is, as you can probably tell, an older mockup of what an Apple “iPod with phone functions” would look like. You can probably expect the iPhone, should it ever come to fruition, would be a little more inventive than simply a Moto ROKR clone.

Johnny Chan, a Morgan Stanley analyst based out of Hong Kong (not the poker player with the eccentric shirts), says that Apple’s iPhone may be manufacturered by Hon Hai Precision, an electronics manufacturer from Taiwan. Other analysts have suggested that Apple may turn to Green Point, also of Taiwan.

Of course, Steve Jobs and associates are keeping pretty hush-hush about the whole thing. They wouldn’t want to steal the thunder from under the company’s new HiFi boombox, now would they?