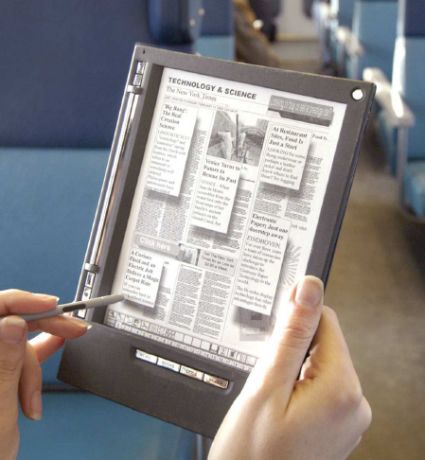 We first heard about the iLiad eBook reader near the end of last year, and now it seems like iRex has a few more details for us to chew on. The iLiad (or less affectionately known as the ER 0100) is made by iRex, a spinoff from Philips, and features a monochrome e-ink touchscreen display.

Despite being designed for little more than reading documents, the iLiad has quite some beef under the hood. There are a 400MHz XScale processor and 64 MB of RAM. As far as internal memory, you’ll find 224MB of flash, in addition to expandability via SD, CF, and USB. Other features include built-in Wi-Fi, Ethernet, and a 3.5 mm audio jack. Formats supported at launch include PDF, XHTML, TXT, and MP3, though iLiad plans on expanding that list.

The Sony Reader is probably going to retail in the $300 to $400 range, but interestingly, word on the street is that this offering from iRex is going to have a sticker price of 650 euros (~$790). Despite having enough battery life for 3 hours of reading each day for a week, this device is going to be a tough sell.