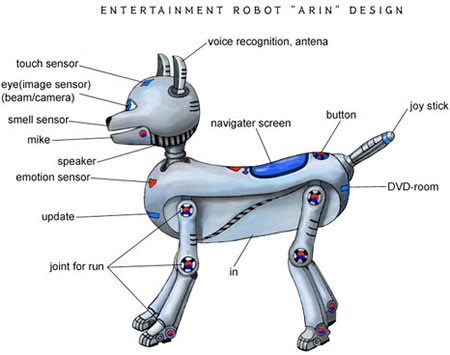 If you were a fan of Aibo, Sony’s robot dog, and you were sad to see him go out of production, this news will make you happy. Jindo is a new robot dog which Korean inventor Eungsang Park claims is much more advanced than Aibo. It is designed for running, so you can take it to the park, as long as you are okay with people staring. It has an LCD screen on its back, so you can watch DMB TV, surf the net or check your e-mail. It’s kind of disturbing that the tail doubles as a joystick, but that lets you play games on the LCD screen, too. Even more disturbing, there is a slot below the tail for you to stick in DVDs so you can watch movies on the screen. The dog is touch sensitive and it’s a cell phone, too.

Before you get too excited, you won’t be able to get one for a while yet. The inventor is still looking for a manufacturer.