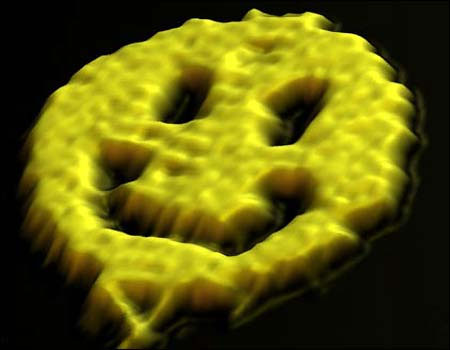 Paul Rothemund, a researcher from Caltech, uses DNA molecules and applies a technique he has developed to create two-dimensional shapes. The technique, aptly called DNA origami, is something Rothemund believes can be used in the future to build small chemical factories or molecular electronics by connecting proteins and inorganic parts to DNA circuit boards.

DNA, long considered the basis of pretty much everything, is rapidly becoming the molecule of choice by nano-designers and engineers. Its composition and chemical attributes have already been widely scrutinized and many tools are already around to manage it. Another plus factor is that DNA can be synthesized in massive quantities fast and cheap.

Rothemund begins his DNA origami by folding a single strand of DNA back and forth until he accomplishes the shape or pattern he wants. The whole piece is then secured at various strategic points with hundreds of short DNA staples.

However, before he uses real DNA, Rothemund uses nano software to design the shapes and patterns he wants the DNA strand to end up looking like. The application also identifies the snippets of DNA code for the staples. From here… “You send an email to a company [that synthesizes DNA] and they send you back a Fed-Ex package with the staples in it”, according to Rothemund.

The DNA pattern is then heated in a salt solution, causing the single DNA strand and the staples to melt together automatically and form the desired two-dimensional shape.