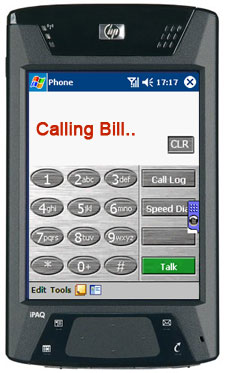 You don’t have to like Microsoft, but you do have to kind of admire their willingness to do what they want regardless of who they might annoy. A report from a ‘trusted source’ familiar with the inner workings of Bill Gates’ empire has surfaced saying that the company will be releasing a SIP-enabled VoIP dialer for phones that are running Windows Mobile 5.0 Pocket PC Phone Edition. It will be an unobtrusive application that will work with WiFi, not 3G. That will surely annoy wireless carriers which would at least like to be able to collect the data use charges.

On one hand, it may not make sense for Microsoft to annoy the carriers which are selling Windows powered phones. VoIP is such a promising and important technology, though, and consumer demand will only grow as more people understand it, that they can they can provide what people want and carriers will have no choice but to go along with it.