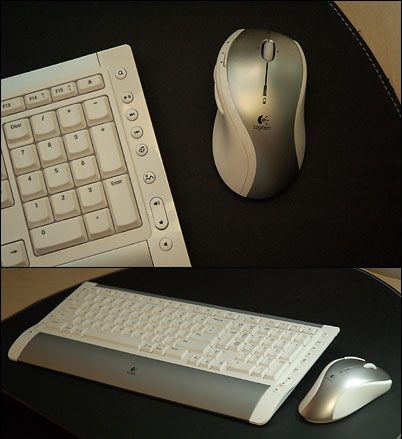 I really don’t know what they were thinking when Logitech released the Cordless Desktop S 530 Laser for Mac. Sure it looks slim and sleek, matches your other mac white gear, even with some mini silver in it. But the performance and functionality clearly makes it a bad addition to your mac desktop experience.

Pretty much every Mac system sold in the last year has Bluetooth. The S 530 on the other hand has its own proprietary wireless dongle. Why? I don’t know. It could be to cut down on costs in getting them Bluetooth certified, using extra surplus from other cordless Windows desktops, who knows – you will have to ask Logitech. But I do know this, if I bought a $99 wireless desktop, I think it would be great to get a Bluetooth adapter for my system. If I already had Bluetooth, the keyboard would work on its own. Or, if the added costs are the issue, they could sell two versions, one with a Bluetooth dongle and one without (for those who already have Bluetooth). I think this is what Logitech should have done, not having Bluetooth this late in the game is unfortunate and would make me think twice about wasting a USB port on this mess.

Now, on to the keyboard. The key kickback sucks, I just want to press a key and have it absorb right into my finger tips. I don’t want to have to push or tap, I want it to feel like I am typing on a sponge, or a sensitive gel type key that is light to the touch and solid when pressed. I’m afraid Logitech completely failed with the Wireless Mac OS keyboard. At best, the keys feel like a wobbly spring-loaded piece of cheap hollow plastic.

Logitech has sent over THREE replacements, even different manufacturing batches, so it can’t just be one of those unlucky ones… The first model had a defunct Apple key. I thought this was some kind of practical joke. How can you use a Mac without an Apple key? I found myself hitting it about 2 or so times for it to respond, the suction cup or cheap plastic hinges behind it were not aligned properly. The second keyboard was worse, it had a funky Shift, Apple, Option… in fact, the entire left side of the keys were made for someone with a robot arm that likes to slam keys. Or a two-finger touch typer. The one I’m typing on now is not as bad as the first two, but the quality is still the same. There was one nice thing about the Keyboard, the edges have multimedia and other fancy shortcuts to email, sound etc. They are Apple white with buttons that are much more along the lines of an Apple product. Only if the same care had gone into the design of the other 98 or so keys.

The mouse is a bit better than the keyboard. In fact, it is the MX 610 Laser minus the IM and Email notifications. It has that Microsoft form factor everyone loves, but still a bit soft on the tail end. The ergonomics are hard to get used to especially if you use a gel wrist pad, and I’m sure most of you do unless you like carpel. Your hand feels a bit over the top of the thing, there is a big gap between your palm and the mouse. As for its size, it would sit right in between a laptop mouse and the MX Laser. Logitech should have stuck with their MX510 design and made them wireless, it was one of the most comfortable mice they ever made. Unfortunately it is discontinued, and its predecessor the MX518 leaves us Mac OSX users hanging dry, XP only.

What this all looks to me is like the common case of the, quick lets put out a product because whatever it goes with is hot. Except this time, its from good old Logitech. I hope it never happens again.

PS. Don’t get me wrong, Logitech has great products. Their Windows products and web cameras are excellent. They are just not ready to get into the Mac game.