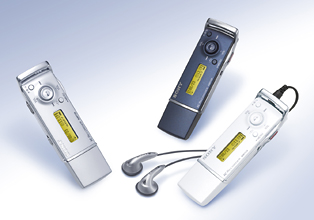 Sony Japan has put out a couple of MP3 flash drives. The 512 MB ICD-U60 and the 1GB ICD-U70 are pretty bare bones, with the exception of MP3 playback capabilities.

Of course, the primary purpose of a thumb drive is for ultra portable data storage, but it’s always nice to have a couple extra bells and whistles. Sony Japan has kept the controls easy and display basic, but you can still do voice recording and listen to a few songs while you’re at it. It seems the devices are plug-and-play, as they should be, and the larger capacity U70 employs an IC recorder as well.

Both should be available now through Japanese retailers, with the 512MB version going for 15,000 yen ($128 USD), and the 1GB version for 20,000 yen ($170 USD). Why Sony is introducing such small capacity devices now in the game is beyond me, although Sony has always had their way of doing things.