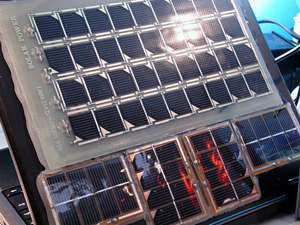 Sometimes, technology that can supplant existing standards can work with that existing technology rather than against it. Such is the case with MSI’s solar cells, which were on full display for the first time last week at CeBIT.

At the tech conference in Hannover, Germany, MSI showed off a notebook computer that was powered by an array of solar cells. But rather than replacing the traditional batteries, the solar cells are designed to work with those batteries, boosting their life by about 20 minutes.

It’s not exactly something that you will get a tax credit for, or save on your electric bills, but it can get you those precious extra minutes that you need to squeeze out of the laptop battery before that last drop of juice is drained.

Expect to see these sun-worshipping notebooks by August.