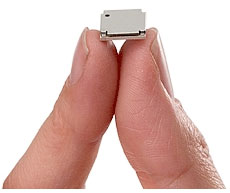 Sharp has unveiled what they are calling the smallest WiFi module in the world. Samsung must be pissed.

This obviously doesn’t directly mean much for us consumers since we can’t rush out and buy one, and even if we could most of us couldn’t do anything with it. What it will mean, though, is that a WiFi module can be stuck into more devices and more places. A smaller module will hopefully mean a module that demands less power. Smaller should eventually mean cheaper, too.

That means soon everything will have WiFi incorporated into it as a standard feature in anything just as rechargeable batteries or a color screen are now. That’s the long term. In the short term, I just hope that it means that Apple gives us a WiiPod sooner rather than later.

There’s no word yet on which companies other than Sharp are planning to use the module or how close it is to being in commercially available devices.