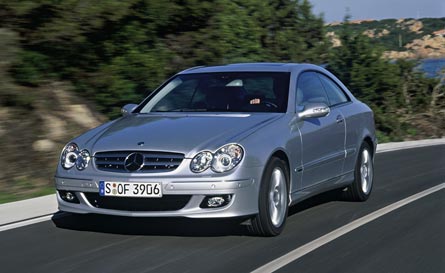 A once little known fact about the CLK class from Mercedes Benz was that it was actually cheaper to produce than an identically equipped, but not quite as sexy C-class sedan. Despite this, the CLK sold for about $10,000 more. It was all in the marketing, and now Audi (A5), BMW (3-series), and Lexus (SC) are about to do the same, crowding that particular segment of the marketplace. And so Mercedes-Benz is working to get another leg up on the competition by introducing several upgrades to the CLK line for the 2009 model year, including night vision.

The third-generation CLK will be hitting showrooms in the summer of 2008, and will feature technologies that were once reserved for the higher end of the company’s spectrum of vehicles. Among the upgrades are Presafe II, night vision, Command II, and the Distronic Plus adaptive cruise control system.

The new CLK will feature all new styling (the provided picture is of a 2007 model), and share some components with the forthcoming E-class and C-class. Mercedes will likely offer three choices in this line: the CLK350 will have a V6 for 272hp; the CLK500 gets its power from a 388hp V8; and the crowning jewel, the CLK63 AMG, will sport a monster 503hp beast under the hood. They will all be rear-wheel-drive, though 4Matic may be an option.