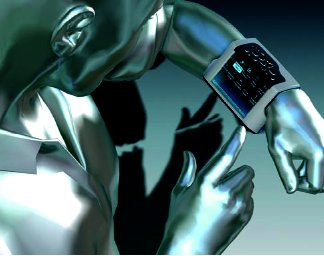 Microsoft’s Origami Project has nothing on this. Who needs a bulky, oversized ultra-mobile PC when you can get your hands on a Wrist-Worn PC. Before everyone starts with the Predator references (“Where are the self-destruct button and funky hieroglyphics?”), this device developed by Eurotech seems quite real, with a whole lot of high-tech goodness.

Weighing in at a mere seven ounces, the Wrist-Worn PC Concept sports a 2.8-inch touchscreen LCD and can run on either Windows CE, or, get this, Linux (!). Other features include Bluetooth, a GPS receiver, 802.11b, USB connectivity, 32MB Flash memory, 64MB SDRAM, SD expansion, and a tilt sensor. Battery life is six hours in “fully operational” mode, with eight hours of juice normally.

Unlike the UMPCs that are flooding the CeBIT floor, this device is not being marketed at the average Joe. Instead, it is designed for “emergency rescue, security, healthcare, maintenance, logistics, and many other applications.” It seems particularly useful for military purposes, and if they get a working version going, the DOD might be one of the first customers in line.