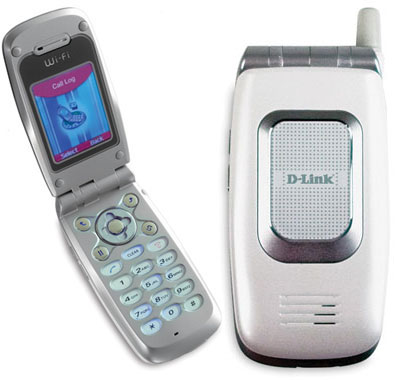 D-Link is already well known for offering a wide range of networking products, including wireless routers and cards, so it’s a natural progression for the company to offer a wireless VoIP phone to strike the pan while it’s still hot. The D-Link DPH-540 is a clamshell WiFi VoIP phone.

In fact, D-Link’s handset bares an eerie resemblance to the Axcess G-1000 released several months ago, now is D-Link trying to pull a fast one on us? We won’t hold it against them, and we’re willing to let that go if D-Link has the steak to back up its sizzle.

The DPH-540 supports a whole bunch of acronyms, including SIP, WEP, WPA, and even SMS messaging (the color screen is great for this last bit), but interestingly the company has opted out of the Skype craze for this offering. Because of the flip phone form factor (alliteration not intended), this internal antenna’d handset looks like your standard issue cellular.

The D-Link DPH-540 Wi-Fi VoIP phone comes packaged in with TelTel VoIP service software, and will retail for $299 when it goes on sale sometime this summer.