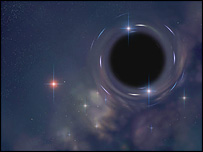 Schrodinger’s Cat might have lost one of its lives.

A new theory about the viability of radiation that enters black holes stipulates that most of that radiation seeps back out; and that conclusion, taken to a highly logical yet highly implausible extreme, could result in a incredibly powerful quantum computer, powered by the incredibly dense engine that is a black hole.

New theories are arriving all the time in the increasingly fuzzy field of quantum mechanics, which purports to explain several of the actions and reactions that take place within the microscopic parts of atoms. And this one could be one of the most bizarre.

At its most basic, quantum mechanics is the story of strange subatomic particles with far-out names like quarks and gluons and leptons and how those particles are created and react with other subatomic particles. Many of the most eminent scientists in the field would not argue with the assertion that such matters have little relevance to the going concerns of everyday life.

At the other end of the physics spectrum are the astrophysicists, who deal in huge things, like planets and stars and galaxies—and black holes. By their very definition, quantum physicists and astrophysicists should not be able to talk about the same subject, at least if they want to put forward all of their expertise and find common ground.

But, in a new issue of the magazine New Scientist, an MIT scientist has put forward a theory that could undermine the preceding assumptions.

One of the mainstays of quantum theory is the idea of Schrodinger’s Cat, which illustrates the idea that at the quantum level, everything has multiple possible outcomes that exist at the same time. The ideas of Seth Lloyd of MIT challenge that by putting forward the idea that a black hole, with its massive amounts of gravitational pull, can eliminate all but one possibility. Such an idea would be contrary to the evidence found in quantum experiments to this point; but scientists don’t know a whole lot about what goes on inside black holes, so technically, anything is possible. Lloyd argues that what comes back out of that black hole could be harnessed into data for a massive computer.

After all, you can think of a computer’s data processing as, at its most basic, the manipulation of a huge string of 0s and 1s that are put together in specific ways to do certain things. The backbone of this data processing, however, is the idea that certain number combinations yield the same results every time out. In computer terms, if you flip a coin, it will always end up heads or it will always end up tails. That’s the way that software is designed, and that’s the way that software powers hardware.

What does it all mean for our purposes? Well, scientists used to think that nothing could escape a black hole, ever. Now, scientists don’t think that to be the case; rather, they think that most of the atoms that fall into a black hole have the ability to come right back out. That is significant because it means that the intense power of the gravity field created by a black hole could, theoretically, be harnessed to do intense calculations that are at the heart of a computer’s power. Imagine a super computer large enough to contain 1 million of Earth’s database servers and you’re getting close to the size of a computer that could be powered by black hole radiation.

Scientists, of course, argue that most of the radiation’s coming back out is the same as none. In other words, it would be the same as a run-time error every time out, since the computer code would be incomplete. But Lloyd has an answer for that to. If we work hard enough, we can overcome this obstacle. Build a net big enough, he argues, and it’s possible. He also argues that what is lost is so minuscule that it doesn’t matter in real terms, since the scale is so large to begin with. (We’re talking trillions and trillions of atoms here.) And with that big net, we can build a massive machine.

That’s what it’s all about, really—the ability to build a bigger, better computer, on a massive scale.

Is it possible? Technically, yes, since we don’t know everything about black holes. Is it possible anytime soon? Probably not, since we would have to invent new technologies that would enable us to get close enough to a black hole to be able to harness that radiation without losing our own form and function.

Still, it is interesting to contemplate such a profound rethinking of accepted science. Pushing the envelope of reality is what science is all about, after all.