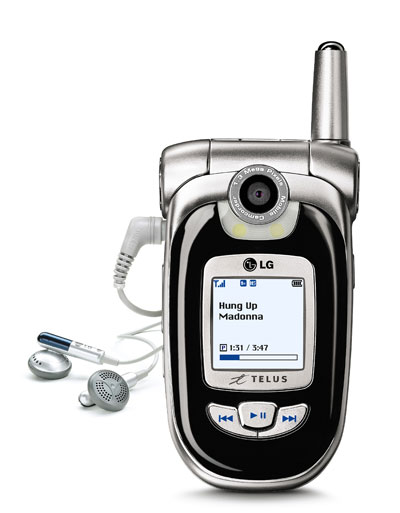 If Americans feel a little left out when it comes to all the goodies that are being launched in Korea on a daily basis, Canadians sometimes feel just as left out when it comes to mobile entertainment when compared to what is offered south of the border. Well, people sporting the maple leaf no longer need to ask, “When can we have a V-Cast like service?” because Telus has launched its Mobile Music service. The catalogue of songs available is far-reaching, with offerings from artists signed by EMI Music, SonyBMG, Universal, and Warner.

This announcement is accompanied by Telus also becoming the exlusive carrier of the LG 8100 handset, a “mobile entertainment and communications device packing an MP3 player, stereo speakers, Bluetooth functionality and much more.” There is also a 1.3MP camera on-board, as well as a mini-SD expansion slot.

This tune-getting service is the latest in Telus’ SPARK solution, which also includes mobile TV, games, and more. Downloads will be fast, thanks to technology based on the CDMA 1xEVDO standard. In many of Canada’s major cities – from Vancouver to Quebec City – customers can expect typical speeds between 400 and 700 kbps, but in areas where only 1X is available, users are limited to 144kbps.

Each track costs $1.99 “plus a 50 cent download fee,” giving users a version of the song both for their mobile phone as well as for their home computer. The LG 8100 is available in both black and white, and will retail for $99.99 with a three-year contract.