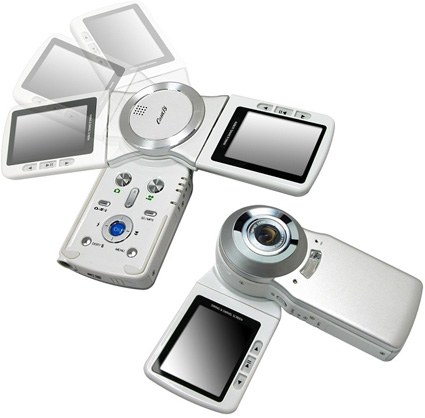 This is a cry to support the little guy. Sure, it’s easy to pick up the latest from a giant like Samsung or Apple, but if you want to keep the market competitive, sometimes you want to turn to lesser known brands, right? Even if their product is a blatant rip-off of someone else? Well, iQRIO has taken the Sony DSC-M1 – maybe even from the same OEM – and rebadged it as their own: the CamP3. The form factor, button layout and whatnot are identical, but that’s not to say that there aren’t any differences.

For one, the CamP3 adds MP3 and video playback functionality to the standard snapshot taking you’d find in a camera. Of course, they had to rework the product a little because, well, they’re not about to design it to take MemoryStick. It takes SD cards instead, up to a maximum capacity of 2GB. You’ll also be able to record VGA videos at 30fps.

It seems the iQRIO CamP3 will come in white and orange, though there is no official word on pricing or availability… not in English, anyways.