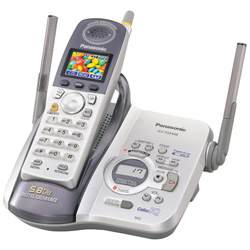 Panasonic has taken its regular, standard issue KX-TG9000 series of cordless phones and added Skype capabilities. Similar to the Dualphone, this handset allows you to not only easily access your regular landline, but also make and receive calls through Skype’s P2P network. You’ll still need a broadband internet connection, of course, but you won’t have to mess with setting up a Wi-Fi network (and all the security issues that accompany that), hooking up a phone to a PC, or heading out to buy a Skype-equipped mobile phone.

Announced at CeBIT, this Skype’d-cordless phone will let you make free calls to and from all of your friends that are already on Skype. Other features include SkypeIn, SkypeOut, and built-in voicemail. They’ve also provided you with the option to choose whether when you make your outgoing calls through a traditional landline or via the Skype network.

According to Panasonic, this will “push VoIP into the mainstream”. No word on pricing, but expect this to drop in the second half of this year in “some European countries.”