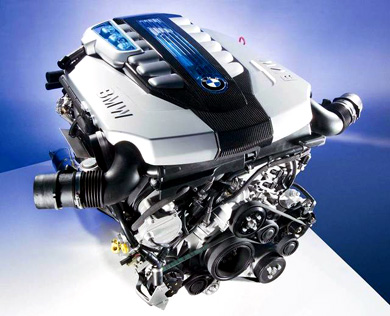 Going green isn’t as simple as it sounds. So many automakers are trying out different technologies that can not only be better for the environment that your regular, run of the mill internal combustion gasoline engine, but also ones that produce oodles of power. It’s hard to sell people on a car with no guts, because for a lot of us, we want something fun to drive.

Well, it seems that BMW has plans for a new powerplant for a limited edition 7-series: a bi-fuel V12 that runs on liquid hydrogen and gasoline, producing in excess of 230 horsepower. Earlier tests have shown that this type of engine is capable of 285hp, pushing vehicles up to 186mph.

To be showcased at NHA (National Hydrogen Association) 2006, this engine runs on liquid hydrogen fuel, rather than gaseous. This allows for more potential power to be stored on the vehicle at one time, because the liquid form offers nearly two times the volumetric density of the gas.

As with any new technology, there are a few speedbumps BMW will have to overcome, including hydrogren boil-off and a high energy requirement for the liquefaction of the gas.